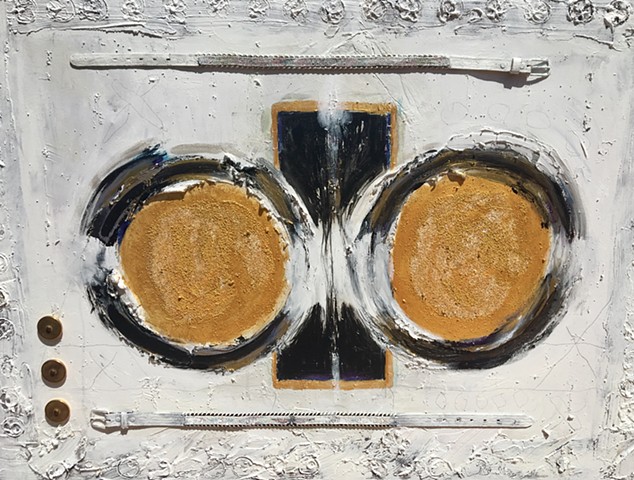 Born and raised in Seattle, Spellman is an abstract artist and entrepreneur now based in Santa Fe, New Mexico. Rooted in the pioneer tradition of the Northwest and the story-telling culture of Irish ancestors who built railroads, re-plumbed a city and led a state, Spellman paints to excavate the truth of her history. This is a personal pilgrimage, her way of grappling with issues such as mortality, infertility and transformation.

Of "Collapse of the Colony" Gallery & Studio’s Maurice Taplinger wrote in Nov/Dec 2011-Jan 2012: “In the tradition of Kandinsky (and perhaps her fellow Northwesterners Mark Tobey and Morris Graves as well) Seattle artist Margo Spellman sees painting as a way to “excavate the truth.” With their softly diffused forms and shimmering colors, her paintings have a searching quality that rewards prolonged scrutiny, producing a meditative sense of calm in the viewer.”

Gallery & Studio's Byron Coleman in 2008: “Calls to mind not only Turner but that odd American visionary Albert Pinkham Ryder.”

“...abstract painter in the biomorphic tradition of Gorky and William Baziotes."

“A powerful, neo-primitive presence akin to the best works of Rufino Tamayo.”

“That Spellman’s paintings are filled with allusions to the natural world lends them to a quality refreshingly unlike the “airlessness” …of much postmodern abstraction. The connection with nature is a vital one for Spellman, whose forms actually seem to bloom on the canvas like flowers in a garden…Often her compositions are quite baroque as a result of the flowing contours her natural shapes take. And the garden-like effect is furthered by her intrepidness as a colorist, which complements the sensuality of her shapes with a kindred chromatic sensuousness.”